Eisenhower's response to the Sputnik threat was to approach Congress on January 7, 1958, for the startup funds necessary for the Advanced Research Projects Agency (ARPA). At that time, government agencies were required to buy computers from different manufacturers each time they made a purchase, to maintain fairness. The new ARPA organization soon found that they had a collection of machines that spoke completely different languages. Sometime after 1962, J. C. R. Licklider conceived of the idea that computers should be able to communicate with one another, even if they were "highly individualistic."

During the 1960s, the ARPAnet was being conceived and developed by a number of talented people. The humble beginning of the ARPAnet was to become the Internet that we know of today. Eventually ARPA was folded into the Defense Advanced Research Projects Agency (DARPA).

Overlapping with the development of ARPAnet, UNIX development was beginning in 1969. The University of California, Berkeley (UCB) later developed their own flavor of UNIX, which was known as BSD. DARPA wanted to divest itself of the business of networking, and so DARPA provided funding to UCB in 1979, to further develop the ARPAnet. In 1982, 4.1BSD and 4.2BSD versions of UNIX were released by UCB that included a TCP/IP network implementation. The network socket concepts and interfaces that you will learn about in this book are based upon the work done by UCB.

Linux draws upon this rich heritage, and so you'll learn about the Linux specific implementation of the BSD socket interface in this book. Figure 1.1 is provided as a time line overview of the history behind the socket interface. 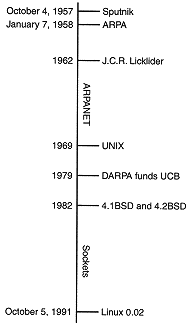 Figure 1.1:
According to the time line, BSD sockets
were developed 24 years after the
formation of ARPA.
Posted by Saurabh Gupta on September 20, 2011