You hear talk of "sockets" all the time, and perhaps you are wondering just what they are exactly. Well, they're this: a way to speak to other programs using standard Unix file descriptors. What?

Ok—you may have heard some Unix hacker state, "Jeez, everything in Unix is a file!" What that person may have been talking about is the fact that when Unix programs do any sort of I/O, they do it by reading or  writing to a file descriptor. A file descriptor is simply an integer associated with an open file. But (and here's the catch), that file can be a network connection, a FIFO, a pipe, a terminal, a real on-the-disk file, or just about anything else. Everything in Unix is a file! So when you want to communicate with another program over the Internet you're gonna do it through a file descriptor, you'd better believe it. "Where do I get this file descriptor for network communication, Mr. Smarty-Pants?" is probably the last question on your mind right now, but I'm going to answer it anyway: You make a call to the socket() system routine. It returns the socket descriptor, and you communicate through it using the specialized send() and recv() (man send, man recv) socket calls.

"But, hey!" you might be exclaiming right about now. "If it's a file descriptor, why in the name of Neptune can't I just use the normal read() and write() calls to communicate through the socket?" The short answer is, "You can!" The longer answer is, "You can, but send() and recv() offer much greater control over your data transmission."
What next? How about this: there are all kinds of sockets. There are DARPA Internet addresses (Internet Sockets), path names on a local node (Unix Sockets), CCITT X.25 addresses (X.25 Sockets that you can safely ignore), and probably many others depending on which Unix flavor you run. This document deals only with the first: Internet Sockets.

Sockets are a protocol independent method of creating a connection between processes. Sockets can be either
Socket characteristics

Each socket type has one or more protocols. Ex: 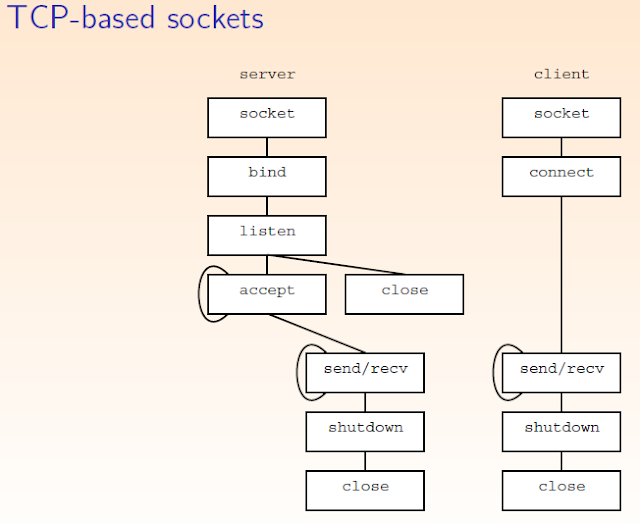 You already know that choosing a domain value for the socket(2) or socketpair(2) function chooses a protocol family to be used. For example, you know that
Consequently, you now have to learn about only two more input
arguments.

The type argument can be:
two way communication with maximum message size. (This is not available on most machines.) protocol is usually zero, so that type defines the connection  within domain.

The SOCK_STREAM socket type is used when you want to perform stream I/O with a remote socket. A stream in the socket sense is the same concept that applies to a UNIX pipe. Bytes written to one end of the pipe (or socket) are received at the other end as one continuous stream of bytes. There are no dividing lines or boundaries. There is no record length, block size, or concept of a packet at the receiving end. Whatever data is currently  available at the receiving end is returned in the caller's buffer.

Example
An example to review might help illustrate the stream I/O concept. In this example, there is a local process on your host that has connected to a remote process on a remote host. The local host is going to send data to the remote host in two separate write(2) calls as follows:
Note what has happened. The local process has performed two separate writes to the socket. These could be two different messages or two different data structures. Yet, the remote process received all of the written data as one combined unit of 55 bytes.

Another way to look at this example is that the local process might have had to create one message in two partial writes. The receiving end received the message as one combined unit.

At other times, depending on timing and buffer availability, the remote process might first get the original piece of 25 bytes (or perhaps even less). Then, on a successive receive function call, obtain the remaining 30 bytes. In short, a stream socket does not preserve any message boundary. It simply returns the data it has to the receiving application.
The receiving end cannot tell what the original message boundaries were. In our example, it cannot tell that the first write(2) was for 25 bytes and the second was for 30. All it can know is the data bytes that it received and that the total bytes sent was 55.
A stream socket has one other important property. Like a UNIX pipe, the bytes written to a stream socket are guaranteed to arrive at the other end in the exact same order in which they were written.
With protocols such as IP, in which packets can take different routes to their destination, it frequently happens that later packets arrive ahead of their earlier cousins. The SOCK_STREAM
socket ensures that your receiving application accepts data bytes in precisely the same sequence in which they were originally written.

Let's recap the properties of a SOCK_STREAM socket:
The last point presented is a new one to this discussion. A stream socket implies that every reasonable effort will be made to deliver data written to one socket, to the socket at the other end. If this cannot be done, the error will be made known to the receiving end as well as the writing end. In this respect, SOCK_STREAM socket is a reliable data transport. This feature makes it a very popular socket type.

There is one more property of the SOCK_STREAM type of socket. It is

Where
Associates a socket id with an address to which other processes
can connect. In internet protocol the address is [ipNumber,
portNumber] 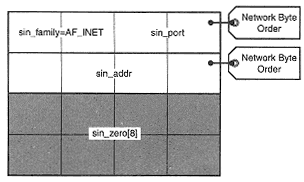 Where size it the number of pending connection requests allowed
(typically limited by Unix kernels to 5). Returns the 0 on success, or -1 if failure.

Returns the socketId and address of client connecting to socket.
if lenPtr or addrPtr equal zero, no address structure is returned. lenPtr is the maximum size of address structure that can be called, returns the actual value. Waits for an incoming request, and when received creates a socket for it.

accept styles
There are basically three styles of using accept:
Iterating server: Only one socket is opened at a time. When the
processing on that connection is completed, the socket is closed, and next connection can be accepted.

Forking server: After an accept, a child process is forked off to
handle the connection. Variation: the child processes
are preforked and are passed the socketId.

Concurrent single server: use select to simultaneously wait on all open socketIds, and waking up the process only when new data arrives.

Pro and Con of Accept styles

Send a message. Returns the number of bytes sent or -1 if failure. (Must be a bound socket). flag is either
recv
#include <sys/types.h>
#include <sys/socket.h>

Receive up to len bytes in bufferPtr. Returns the number of
bytes received or -1 on failure. flags can be either

this is the first of the client calls

Specifies the destination to form a connection with (addrPtr), and returns a 0 if successful, -1 otherwise.

Note that a connection is denoted by a 5-tuple:
So that multiple connections can share the same IP and port.

Note that the initiator of communications needs a fixed port to
target communications. This means that some ports must be reserved for these “well known” ports.
Port usage:

We next consider a number of auxiliary APIs:
gethostname

Returns the hostname of the machine on which this command
executes (What host am i?). Returns -1 on failure, 0 on success.
MAXHOSTNAMELEN is defined in <sys/param.h>.

Translates a DNS name into a hostent.

IP address strings to 32 bit number
In what follows, ’p’ stands for presentation.
Hence, these routines translate between the address as a string and the address as the number.

Hence, we have 4 representations:
Only the last needs an outside lookup to convert to one of the
other formats. 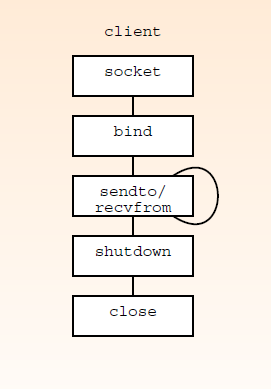 The sendto(2) function allows you to write a datagram and specify the destination address of the recipient at the same time. The function synopsis is as follows:

Don't let the number of arguments intimidate you about this function. They are quite easy to understand, after they are described:
1. The first argument s is the socket number. You received this value from the socket(2)function.
2. Argument msg is a pointer to the buffer holding the datagram message that you wish to send.
3. Argument len is the length, in bytes, of the datagram that starts at the pointer given by msg.
4. The flags argument allows you to specify some option bits. In many cases, you will simply supply a value of zero.
5. The argument to is a pointer to a generic socket address that you have established. This is the address of the recipient of the datagram.
6. Argument tolen is the length of the address argument to.

The value returned by the function sendto(2), when successful, is the number of bytes sent (note that this is no guarantee that they were received at the remote end.) When an error occurs, the
function returns a value of -1 and the value errno can be consulted to find out why.

The companion to the sendto(2) function is the recvfrom(2) function. This function differs from the read(2) function in that it allows you to receive the sender's address at the same time
you receive your datagram. The function synopsis is as follows:

The list of arguments is very similar to those used in the sendto(2) function. The recvfrom (2) arguments are

Like any normal read(2) operation, the receiving buffer buf must be large enough to receive the incoming datagram. The maximum length is indicated to the function by the argument len.

Note especially, however, that the last argument is a pointer to the length of the receiving address structure. Prior to calling the function recvfrom(2), the int value that this pointer points to must contain the maximum byte size of the receiving address structure from. Upon return from the function, the actual size of the address returned is placed into this int variable. In effect, the value pointed to by fromlen acts as both an input value and a returned value.

TIP
If you are using the function recvfrom(2) to receive datagrams for varying protocols, make certain that you allow sufficient socket address space to receive all address families that you might encounter. For example, the socket address size differs for address families AF_INET and AF_LOCAL (AF_UNIX). Often a C
union data type can allow for the maximum size needed.

Note :
I will post the separate example for each TCP/UDP client-server very soon, as soon I will finish them and have a one round of unit testing on that.
thanks for reading.