It is important that you have an understanding of some of the concepts behind the socket interface before you try to apply them. This section outlines some of the high level concepts surrounding the sockets themselves.
Defining a Socket
To communicate with someone using a telephone, you must pick up the handset, dial the other party's telephone number, and wait for them to answer. While you speak to that other party, there are two endpoints of communication established:
• Your telephone, at your location
• The remote party's telephone, at his location
As long as both of you communicate, there are two endpoints involved, with a line of communication in between them. Figure 1.2 shows an illustration of two telephones as endpoints, each connected to the other, through the telephone network. 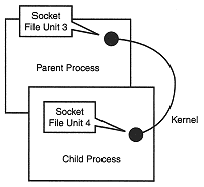 Figure 1.3:
A Client / Server example using fork(2) and socketpair(2).
The parent process is the original starting process. It will immediately ask for a pair of sockets by calling socketpair(2) and then fork itself into two processes by calling fork(2).
The server will accept one request, act on that request, and then exit. The client likewise in this example will issue one request, report the server response, and then exit. The request will take the form of the third argument to the strftime(3) function. This is a
format string, which will be used to format a date and time string. The server will obtain the current date and time at the time that the request is received. The server will use the client's request string to format it into a final string, which is returned to the client.