Iterators are objects that can iterate over elements of a sequence. They do this via a common interface that is adapted from ordinary pointers. Iterators follow the concept of pure abstraction: Anything that behaves like an iterator is an iterator. However, iterators have different abilities. These abilities are important because some algorithms require special iterator abilities. For example, sorting algorithms require iterators that can perform random access because otherwise the run-time would be poor. For this reason, iterators have different categories (figure below). The abilities of these categories are listed in table below, and discussed in the following coming posts. 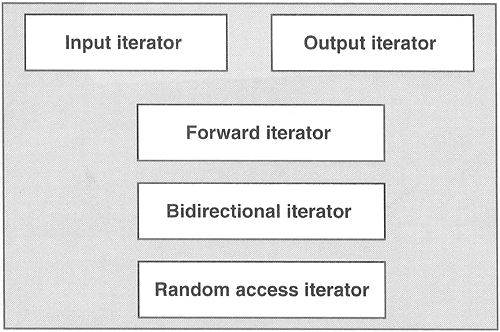 Input iterators can only step forward element-by-element with read access. Thus, they return values elementwise. Table below lists the operations of input iterators.

Note that input iterators can read elements only once. Thus, if you copy an input iterator and let the original and the copy read forward, they might iterate over different values.

Almost all iterators have the abilities of input iterators. However, usually they can have more. A typical example of a pure input iterator is an iterator that reads from the standard input (typically the keyboard). The same value can't be read twice. After a word is read from an input stream (out of the input buffer), the next read access returns another word.

Two input iterators are equal if they occupy the same position. However, as stated previously, this does not mean that they return the same value on element access.


The same applies to decrement operators, as long as they are defined (they aren't for input iterators).

Output iterators are the counterparts of input iterators. They can only step forward with write access. Thus, you can assign new values only element-by-element. You can't use an output iterator to iterate twice over the same range. The goal is to write a value into a "black hole" (whatever that means). So, if you write something for the second time at the same position into the same black hole, it is not guaranteed that you will overwrite a previous value. Table below lists the valid operations for output iterators. The only valid use of operator * is on the left side of an assignment statement.


Bidirectional iterators are forward iterators that provide the additional ability to iterate backward over the elements. Thus, they provide the decrement operator to step backward (table below).

Random access iterators are provided by the following objects and types:

Note that in the last loop the expression

Figure :- Incrementing Iterators by More than One Element


The Increment and Decrement Problem of Vector Iterators

Typically, the compilation of sort() fails. However, if you use, for example, a deque rather than a vector, it will compile. It might compile even with vectors, depending on the implementation of class vector.


The problem is not as bad as it sounds. You can't get unexpected behavior because it is detected at compile time. But it is tricky enough to spend time solving it. This problem also applies to strings. String iterators are usually also implemented as ordinary character pointers, although this is not required.