STL iterators in c++ : Standard Template Library Tutorial, ccplusplus.com
An iterator is an object that can "iterate" (navigate) over elements. These elements may be all or part of the elements of a STL container. An iterator represents a certain position in a container. The following fundamental operations define the behavior of an iterator:
These operations are exactly the interface of ordinary pointers in C and C++ when they are used to iterate over the elements of an array. The difference is that iterators may be smart pointers — pointers that iterate over more complicated data structures of containers. The internal behavior of iterators depends on the data structure over which they iterate. Hence, each container type supplies its own kind of iterator. In fact, each container class defines its iterator type as a nested class. As a result, iterators share the same interface but have different types. This leads directly to the concept of generic programming: Operations use the same interface but different types, so you can use templates to formulate generic operations that work with arbitrary types that satisfy the interface.
All container classes provide the same basic member functions that enable them to use iterators to navigate over their elements. The most important of these functions are as follows:

Figure : begin() and end() for Containers

Here is an example demonstrating the use of iterators. It prints all elements of a list container (it is the promised enhanced version of the first list example).

After the list is created and filled with the characters 'a' through 'z', all elements are printed within a for loop:

The iterator pos is declared just before the loop. Its type is the iterator type for constant element access of its container class:

The exact type of iterator and const_iterator is implementation defined. Inside the for loop, the iterator pos first gets initialized with the position of the first element:

The loop continues as long as pos has not reached the end of the container elements:

Here, pos is compared with the past-the-end iterator. While the loop runs the increment operator, ++pos navigates the iterator pos to the next element.


All in all, pos iterates from the first element, element-by-element, until it reaches the end (figure below). If the container has no elements, the loop does not run because coll.begin() would equal coll.end().

Figure : Iterator pos Iterating Over Elements of a List

In the body of the loop, the expression *pos represents the actual element. In this example, it is written followed by a space character. You can't modify the elements because a const_iterator is used. Thus, from the iterator's point of view the elements are constant. However, if you use a nonconstant iterator and the type of the elements is nonconstant, you can change the values. For example:

Note that the preincrement operator (prefix ++) is used here. This is because it might have better performance than the postincrement operator. The latter involves a temporary object because it must return the old position of the iterator. For this reason, it generally is best to prefer ++pos over pos++. Thus, you should avoid the following version:


For this reason, I recommend using the preincrement and pre-decrement operators in general.


Examples of Using Sets and Multisets

The first example shows how to insert elements into a set and to use iterators to print them:


As usual, the include directive


defines all necessary types and operations of sets.
The type of the container is used in several places, so first a shorter type name gets defined:

This statement defines type IntSet as a set for elements of type int. This type uses the default sorting criterion, which sorts the elements by using operator <. This means the elements are sorted in ascending order. To sort in descending order or use a completely different sorting criterion, you can pass it as a second template parameter. For example, the following statement defines a set type that sorts the elements in descending order (Note that you have to put a space between the two ">" characters. ">>" would be parsed as shift operator, which would result in a syntax error.)

greater<> is a predefined function object. For a sorting criterion that uses only a part of the data of an object (such as the ID).

All associative containers provide an insert() member function to insert a new element:

The new element receives the correct position automatically according to the sorting criterion. You can't use the push_back() or push_front() functions provided for sequence containers. They make no sense here because you can't specify the position of the new element.


Figure : A Set that Has Six Elements 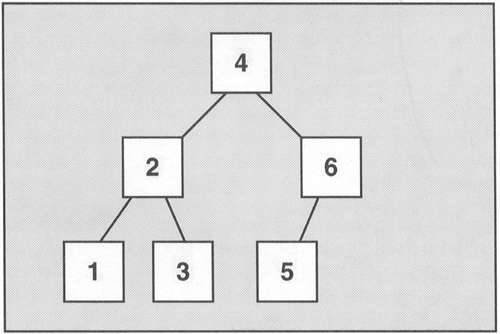 To print the elements of the container, you use the same loop as in the previous list example. An iterator iterates over all elements and prints them:


Figure : Iterator pos Iterating over Elements of a Set


If you want to use a multiset rather than a set, you need only change the type of the container (the header file remains the same):


A multiset allows duplicates, so it would contain two elements that have value 1. Thus, the output of the program would change to the following:

The elements of maps and multimaps are key/value pairs. Thus, the declaration, the insertion, and the access to elements are a bit different. Here is an example of using a multimap:


The program may have the following output:

However, because "this" and "is" have the same key, their order might be the other way around. When you compare this example with the set example on page 87, you can see the following two differences:
Multimaps can also be used as dictionaries. See page 209 for an example.

In the previous example, if you replace type multimap with map you would get the output without duplicate keys (the values might still be the same). However, a collection of key/value pairs with unique keys could also be thought of as an associative array. Consider the following example:

Maps enable you to insert elements by using the subscript operator [ ]:

Note that the subscript operator behaves differently than the usual subscript operator for arrays: Not having an element for an index is not an error. A new index (or key) is taken as a reason to create and to insert a new element of the map that has the index as the key. Thus, you can't have a wrong index. Therefore, in this example in the statement

creates a new element that has the key "Null". The assignment operator assigns 0 (which gets converted into float) as the value.

Similar to multimaps, for maps to access the key and the value of an element you have to use the first and second members of the pair structure. The output of the program is as follows:

Iterators can have capabilities in addition to their fundamental operations. The additional abilities depend on the internal structure of the container type. As usual, the STL provides only those operations that have good performance. For example, if containers have random access (such as vectors or deques) their iterators are also able to perform random access operations (for example, positioning the iterator directly at the fifth element).
Iterators are subdivided into different categories that are based on their general abilities. The iterators of the predefined container classes belong to one of the following two categories:
To write generic code that is as independent of the container type as possible, you should not use special operations for random access iterators. For example, the following loop works with any container:


However, the following does not work with all containers:

The only difference is the use of operator < instead of operator != in the condition of the loop. Operator < is only provided for random access iterators, so this loop does not work with lists, sets, and maps. To write generic code for arbitrary containers, you should use operator != rather than operator <. However, doing so might lead to code that is less safe. This is because you may not recognize that pos gets a position behind end(). It's up to you to decide which version to use. It might be a question of the context, or it might even be a question of taste.

Posted by ccplusplus support on January 20, 2014