Although the entire string 'rejoiced' was sent as out-of-band data using send(2), the following observations can be made at the receiving end:
The fact that the d byte was received ahead of the bytes 'rejoice' does indeed demonstrate that the d byte was more urgent. It shows that the byte ordering has been disturbed by an urgency factor.

When the send(2) socket interface function is used with the flag bit MSG_OOB set, the data is written to the TCP outgoing queue and an urgent pointer is established. The precise location of this pointer is determined by the tcp_stdurg setting that was covered earlier. Table 14.2 reviews the two interpretations and indicates where the urgent pointer is placed.

Table 14.2: The TCP Urgent Pointer Based Upon tcp_stdurg Settings

Figure 14.1 shows how the TCP sending buffer can be visualized after the send(2) call has returned from queuing the string 'rejoiced' as out-of-band data. Although we are most interested in the BSD interpretation (because of Linux), both interpretations are illustrated in the figure. 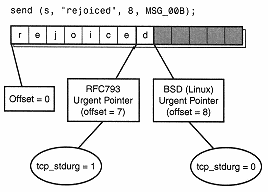 Figure 14.1:
Here is a graphical representation of the TCP urgent pointers.

The sequence of events that occur from calling send(2) using the MSG_OOB flag are as follows for the BSD interpretation (tcp_stdurg=0):
In the example program oobsend.c, the send(2) call was followed by a call to sleep(3). This action causes the Linux kernel to perform the following:
After these steps take place, the packet speeds on its way to the receiving host over the network. This packet is received at the remote end, conceptually as shown in Figure 14.2 (with protocol
details omitted): 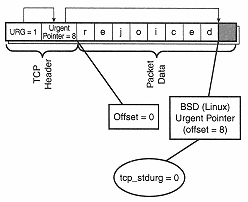 When a packet is received with the URG bit set to true, as shown in Figure 14.2, the Linux kernel will notify the process (or process group) that owns the socket, with the signal SIGURG. This is done because the packet contains an urgent pointer (that is why the URG bit is set in the TCP header).

Even if the out-of-band data was not read in the signal handling function, only the bytes 'rejoice' and subsequent nonurgent data would be read, if any. The d byte would be prevented from being
returned in the normal inband data because it has been identified as out-of-band data.

Space does not permit us to dwell on this case, but a few comments are worthwhile. When tcp_stdurg=l, a strange thing often happens— urgent mode is often entered and its corresponding urgent pointer is received without any corresponding urgent data to be read. If the urgent pointer happens to be at the end of the last data byte included within the packet, then there might not be any following byte received. The urgent data byte might follow in a subsequent packet.

For this reason, when this mode of operation is used, the recv(2) call with the MSG_OOB flag set does not necessarily return an out-of-band byte for TCP when the signal SIGURG is raised.

TIP
When tcp_stdurg=1 under Linux, a recv(2) call will return the errno value EAGAIN when no urgent data is available to read. Some other UNIX implementations (BSD UNIX, for example) return the errno value EWOULDBLOCK instead. To handle the situation where the urgent data byte was unavailable, you must perform the following (remember this applies only when tcp_stdurg=1):
Again, it must be emphasized that you probably won't use these steps for Linux code, unless a change in direction is made for Linux. Linux uses the BSD (tcp_stdurg=0) mode of urgent data by default, which is easier to cope with.
Posted by Saurabh Gupta on September 15, 2011