Before you move onto other aspects of socket programming in the chapters that follow, there is one other concept related to socket addresses that must be understood. This is the concept of interface addresses.
Using the familiar telephone example again, imagine the President's office where there are two (or more) telephones on his desk. Using one of the telephones, he can contact his wife to see how her day is going. On the other hand, using the red telephone gets him in touch with the Russian president. Each of these two telephones is, in a sense, an interface between two different networks. These are
The important point in this example is that you must use the correct interface (telephone) to reach the correct network. For example, the President would be unable to call his wife on the red telephone. Conversely, the domestic telephone would not be able to reach the Russian president's highranking office telephones, which are on secure lines.
In a similar manner, there are times when you want your socket program to specify which interface to use when attempting to contact a remote socket. This is done when you know that one interface is the only way to reach the destination network.
When you are expecting to receive a telephone call, there are times when you want to receive calls only on a particular telephone.
For example, the teenage daughter might want to receive calls only on the telephone installed in her bedroom. For others in the household, they expect to receive telephone calls only in a downstairs room where the other telephone is installed. Your socket program will likewise sometimes want to accept connections from only one specific interface and ignore all others.
Specifying an Interface Address Example
A concrete example is shown in Figure 5.1, which specifies an interface address. 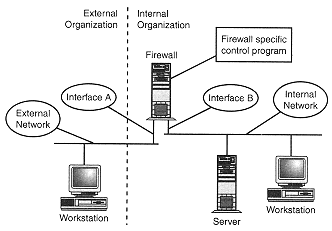 abort(); /* Failed */
}
len_inet = sizeof adr_inet;
z = bind(sck_inet, (struct sockaddr *)&adr_inet, len_inet);
Listing above is functionally identical to Listing for (specific address), with the exception that the address value assigned
was htonl(INADDR_ANY) instead of a specific IP address. A socket bound in this way can accept connections from any interface. It can also connect to a remote socket going out from any
interface (this is automatically determined by routing tables).
NOTE
The value INADDR_ANY is also known as a wildcard address.
Posted by Saurabh Gupta on August 07, 2011