There are entire books and long college courses that discuss Object design, I will go through the basics. As discussed in the previous section, An object (synonymous with a class in C++) has data that it remembers and actions that it can perform. So once it has been determined how an object fits into a program, it's member data and member functions can be determined. The question becomes how to determine what role within a program an object is will play.
The role that an object plays within a program should be able to be defined in one to three short sentences. If it takes more than this to define (generally) an object's role, then there should be more than one object. For instance, good concise role's for an object would be:
OR
OR
OR
Drawing pictures that describe the functionality of objects can be a big help when designing a program. Pictures can often describe the relationship between objects better than a paragraph of words. Objects relate to each other in the following ways: ownership (contains), contained-by, knows-about, doesn't-know-about.
Here's a picture of how some of the objects in the text-based medieval video game relate to each other: 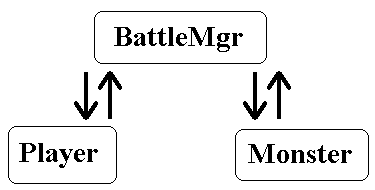 Players and Monsters need to be able to fight each other. Otherwise it wouldn't be a very exciting game. When the Player and a Monster are Battling they battle through a third object, the BattleMgr. The BattleMgr decides which Battler acts first, and eventually, which battler wins. So the Player object and the monster object need to know about the BattleMgr, and the BattleMgr needs to know about both the Player and the Monster.
We have already decided on the attributes of a Battler, so let's add these to the picture. 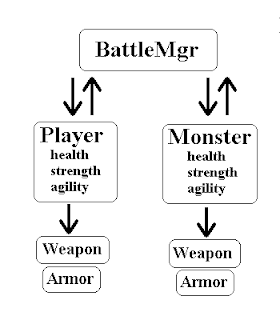 Remember our pseudo-code for a battler:
Player Object:
data:
health
strength
agility
type of weapon
type of armor
actions:
move
attack monster
get treasure
END
Notice that the actions are not listed in the picture, Just the attributes (data). Weapons and Armor are their own type of objects so players/monsters must know about one of each of these types of objects. The reason that health, strength, and agility are treated differently will become clear later. For now, understand what we are trying to accomplish by drawing a picture: we want to first of all understand the relationships between objects. Secondly we want to talk our way through the program with this picture and make sure that we aren't leaving something out.
Let's move to a more complex example. In our game, a player can move through a maze encountering Monsters to battle, and weapons and treasure to pick up.
We still have Players, Monsters, and a BattleMgr. We also have a GameDatabase (GameDB) which keeps track of all the rooms in the maze and what is in them. We also have a RoomManager (RoomMgr) that keeps track of the current room where the player is and interfaces with the GameDB when the player moves to see where the player ends up.
Here is the diagram: 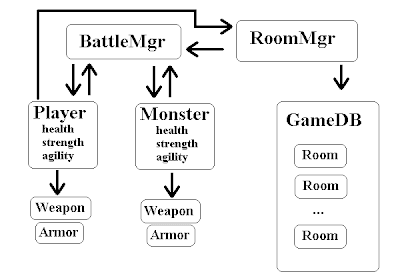 So let's go through some parts of the game. The player starts the game and decides to go east: so the Player object tells the RoomMgr that the player is going east. The RoomMgr checks that the move is valid and then asks the GameDB for the next room.
We already have a few problems. The RoomMgr needs an instance variable to keep track of the current room. How does the RoomMgr know if "east" is a valid move? Well, each room will have to have 4 instance variables: east, west, north, and south. Their values will be 1 if that is a valid direction and 0 if it is not a valid direction. What about the contents of the room. What can rooms contain? We'll have to create a Treasure object and rooms will have to keep a list of what Treasure they contain and also what Monsters reside in that room.
How will we keep a list of an arbitrary number of items? We will use what is called a linked list. This will be a good example of reusing pieces of code.
So where do we go from here? In the next section, we will try and pseudo-code out our program. We will determine how we want everything to work and then write it down in pseduo-code.
Before going into the next section take a shot at re-drawing the previous picture and figure out how you would organize the objects and what instance variables and member functions they would contain. Your picture will no doubt be different from ours. Not that that means you are right or wrong. One of the interesting things about programming is that there are often many different ways to solve the same problem.
Posted by Saurabh Gupta on July 23, 2011

Email ThisBlogThis!Share to TwitterShare to FacebookShare to Pinterest
Labels: C++