The adapter pattern (often referred to as the wrapper pattern or simply a wrapper) is a design pattern that translates one interface for a class into a compatible interface. An adapter allows classes to work together that normally could not because of incompatible interfaces, by providing its interface to clients while using the original interface. The adapter translates calls to its interface into calls to the original interface, and the amount of code necessary to do this is typically small. The adapter is also responsible for transforming data into appropriate forms.
The adapter pattern is adapting between classes and objects. Like any adapter in the real world it is used to be an interface, a bridge between two objects. In real world we have adapters for power supplies, adapters for camera memory cards, and so on. Probably everyone have seen some adapters for memory cards. If you can not plug in the camera memory in your laptop you can use and adapter. You plug the camera memory in the adapter and the adapter in to laptop slot. That's it, it's really simple.
What about software development? It's the same. Can you imagine an situation when you have some class expecting some type of object and you have an object offering the same features, but exposing a different interface? Of course, you want to use both of them so you don't to implement again one of them, and you don't want to change existing classes, so why not create an adapter...
Simple Example :

Structure of the Adapter Pattern 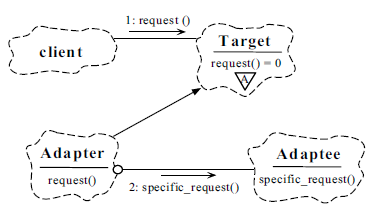 The figure below shows a UML class diagram for the Adapter Pattern: 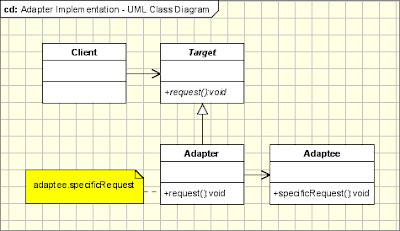 The classes/objects participating in adapter pattern:

The visitor pattern is used when:


1. Objects Adapters - Based on Delegation

Objects Adapters are the classical example of the adapter pattern. It uses composition, the Adaptee delegates the calls to Adaptee (opossed to class adapters which extends the Adaptee). This behaviour gives us a few advantages over the class adapters(however the class adapters can be implemented in languages allowing multiple inheritance). The main advantage is that the Adapter adapts not only the Adpatee but all its subclasses. All it's subclasses with one "small" restriction: all the subclasses which don't add new methods, because the used mechanism is delegation. So for any new method the Adapter must be changed or extended to expose the new methods as well. The main disadvantage is that it requires to write all the code for delegating all the necessary requests tot the Adaptee. 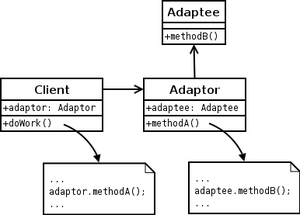 2. Class Adapters - Based on (Multiple) Inheritance 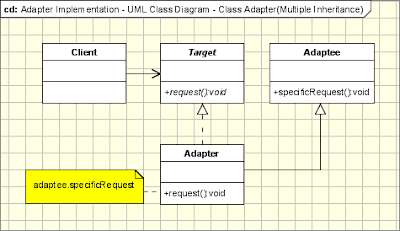 Class adapters can be implemented in languages supporting multiple inheritance(Java, C# or PHP does not support multiple inheritance). Thus, such adapters can not be easy implemented in Java, C# or VB.NET. Class adapter uses inheritance instead of composition. It means that instead of delegating the calls to the Adaptee, it subclasses it. In conclusion it must subclass both the Target and the Adaptee. There are advantages and disadvantages:

If the Target is represented by an interface instead of a class then we can talk about "class" adapters, because we can implement as many interfaces as we want.

How Much the Adapter Should Do?

This question has a really simple response: it should do how much it has to in order to adapt. It's very simple, if the Target and Adaptee are similar then the adapter has just to delegate the requests from the Target to the Adaptee. If Target and Adaptee are not similar, then the adapter might have to convert the data structures between those and to implement the operations required by the Target but not implemented by the Adaptee.

The Two-Ways Adapters are adapters that implements both interfaces of Target and Adaptee. The adapted object can be used as Target in new systems dealing with Target classes or as Adaptee in other systems dealing with Adaptee classes. Going further on this line of thinking, we can have adapters implementing n interfaces, adapting to n systems. Two-way adapters and n-way adapters are hard to implement in systems not supporting multiple inheritance. If adapter has to extend the Target class it can not extent another class like Adaptee, so the Adaptee should be an interface and all the calls should be delegated from the adapter to the Adaptee object.

Adapter Pattern and Strategy Pattern - there are many cases when the adapter can play the role of the Strategy Pattern. If we have several modules implementing the same functionality and we wrote adapters for them, the adapters are implementing the same interface. We can simply replace the adapters objects at run time because they implements the same interface.
Benefits
interfaceIt helps the developers to relate the unrelated class such that they may work together. It provides compatibility between the classes and increases the transparency. Additionally it provides a pluggable kit, delegates objects, makes the classes highly reusable and achieves the goal through inheritance or composition.